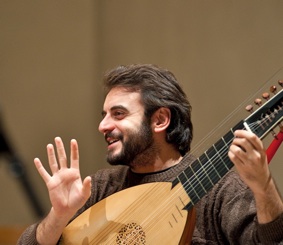 Daniele Caminiti was born in Messina, Italien. He graduated in classical guitar at the Conservatorio in Pescara. He studied for three years with Oscar Ghiglia at the Music Academy in Basel, where he obtained the Concert Diploma with the honor excellent. As soloist he has won many prizes in various national and international competitions. He has dedicated himself to the study of early music played on historical instruments such as archlute, theorbo, baroque and romantic guitar. He studied with Peter Croton at the Schola Cantorum Basiliensis, where he also worked for several years as official accompanist on plucked instruments.