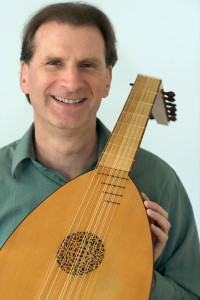 Award-winning lutenist Peter Croton is an active performer & recording artist as soloist & accompanist. In the press he has been called a “lyric poet of the lute” (Saale-Zeitung) and has been praised for his “breathtaking virtuosity” and “astonishing range of tone colors and dynamics” (Nürnberger Nachrichten).
Born in the USA, Peter Croton lives in Switzerland where he teaches lute, romantic guitar, and basso continuo at the Schola Cantorum Basiliensis, as well as lute, historical performance practice and guitar continuo at the Music of Basel and Bern. He won first prize at the Erwin Bodky Competition for Early Music in Cambridge MA (1984) and has also won prizes at other international competitions. He has recorded numerous CDs and appeared on television and radio as soloist and chamber musician. Peter’s regular duo partners have included the singers Derek Lee Ragin and Theresia Bothe, as well as the Egyptian oud-player Nehad El Sayed, and he has appeared at many international festivals with artists such as Andreas Scholl, René Jacobs, Susanne Rydén and others.
His newest book, A Method for the Renaissance Lute, with a Supplement for the Archlute, has been called “groundbreaking” and “a work that extends the concept of the lute method quite beyond anything that has been attempted so far” (The Lute Society - UK). His book Performing Baroque Music on the Lute & Theorbo: a practical handbook based on historical sources was published in 2016; Hopkinson Smith has praised its “wealth of information and insight”. His Performing Baroque Music on the Classical Guitar: a practical handbook based on historical sources was published in 2015; David Russell calls it a “fabulous book – it will be a great help and inspiration to many guitarists”. His tutor, Figured Bass on the Classical Guitar - a practical approach based on historical principles, has been described by Konrad Ragossing as “...a valuable contribution not only to the practice of  playing thoroughbass on the classical guitar, but above all to the expansion of knowledge of musical practice in a fundamental period in Western music - a  guide equally important for all guitarists, for teachers, students and concert artists”.  His compositions for voice & lute have been described as “challenging and refined... highly suited for inclusion in today's concert repertoire” (DLG-Lauteninfo).
Peter is President of the German Lute Society (Deutsche Lautengesellschaft) and is the initiator & artistic director of BASELPLUCKS - Festival for lute & guitar.
academy | activities | instructors | awards | gallery | projects | sponsors | General Site Map
Back to content | Back to main menu