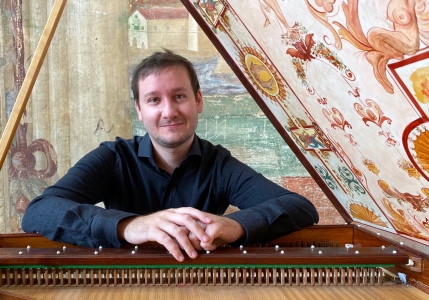 Cembalist and conductor, he is currently studying harpsichord at the
University of Music and Performing Arts in Vienna. There he was
influenced by the teachings of Wolfgang Glüxam, Patrick Ayrton, Maja
Mijatovic, Erich Traxler and Dimitri Bondarenko. In 2021 he will be
involved in the execution of the second book of the Well-Tempered
Clavier by J.S.Bach and several baroque opera productions as “maestro al
cembalo” (C.Monteverdi Incoronazione di Poppea, J.Blow Venus and
Adonis, G.F.Handel La Resurrezione). He has collaborated as a continuo
player with I Musicali Affetti of Fabio Missaggia, the Ancient Music
Academy of Brunico with Stefano Veggetti and Academia Montis Regalis
with Fabio Bonizzoni and Enrico Onofri.
In 2020 he was an active participant at the Ton Koopman Academy.
In September 2019 he conducted Elisir d'amore at the Teatro Olimpico in
Vicenza.
In 2014 he began studying ancient keyboard instruments thanks to Lorenzo
Feder and Takashi Watanabe.
In 2013 he completed the bachelor in orchestra conducting under the
guidance of Giancarlo Andretta at the Conservatory of Vicenza with the
highest marks and honors.
He is the artistic director of the project Crescere in Musica in Vicenza.
academy | activities | instructors | awards | gallery | projects | sponsors | General Site Map
Back to content | Back to main menu