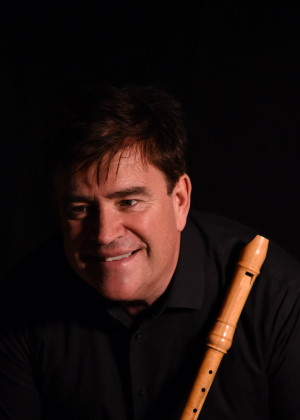 Michael Oman has made a great name for himself, above all as a recorder soloist and
director of the Austrian Baroque Company. As a Baroque specialist, he now numbers among
the most prominent and versatile recorder players of his generation. He graduated from the
Bruckner University in Linz and studied the recorder with (among others) Walter van Hauwe
und Kees Boeke at the Conservatorium van Amsterdam (NL). At the age of 26 he was already
professor of recorder, chamber music and historically informed performance at the Bruckner
University in Linz.
In 2001 Michael Oman founded the Austrian Baroque Company, a leading Early Music
ensemble for the music of the 17th and 18th centuries, which he presents worldwide in
artistic projects ranging from intimate recorder recitals to Baroque ensemble music and
recorder concertos. Many of his CD recordings have won international prizes. His innovative
programming concepts and his impulsive virtuoso playing are highly praised by public and
press alike.
As a conductor Michael Oman has recently appeared with the Californian Baroque Orchestra
Musica Angelica (Los Angeles), the chamber orchestra Camerata Schulz Wien and the Mozart
Youth Orchestra Japan.
With the newly established ensemble Eurowinds together with his colleagues Dorothee
Oberlinger (D) and Maurice Steger (CH), concerts in Austria and Germany are planned for
the upcoming season.
Michael Oman has been the artistic curator of the concert series “Evening Music in the
Ursulinen Church Linz” since 2007, as well as founding the “Eferding Castle Concerts” in
2009.
In 2019 Michael Oman founded the Austrian Recorder Academy (ARA), a training academy
for young highly talented recorder players. The first edition took place in November 2019
together with his dutch teacher Prof. Kees Boeke, a world-renowned "legend" in the
recorder scene. In the following years there will be planned masterclasses, lectures and
concerts led by an international team of lecturers who will support the career of young
recorder players in this forum.
academy | activities | instructors | awards | gallery | projects | sponsors | General Site Map
Back to content | Back to main menu