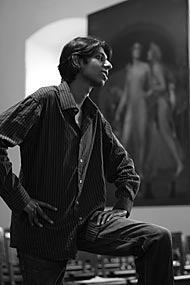 Jeremy Joseph was born in 1978 in Durban, South Africa. He started out with piano classes, when he continued with 9 years to learn to play the organ, with 14 years he became the organist at the Cathedral of Durban. He had private classes at Hans Fagius in Copenhagen, from 1998 to 2003 he has been studying with Martin Haselböck at the Music Academy in Lübeck.

In September 1999, Jeremy Joseph won the international Silbermann-Wettbewerb and won the 2nd prize at the International Organ Contest in Dublin. Jeremy Joseph had concerts at the Schleswig-Holstein Music Festival, at Musikhalle Hamburg, at the Vienna Musikverein, in Dresden, Madrid, Rome, Salamanca, Moscow, with the TV channels NDR, SWR and ORF. Jeremy Joseph lives in Vienna, where he works as organist und cembalist, among others at the Vienna Academy of Music.